Warning: Parameter 1 to wp_default_scripts() expected to be a reference, value given in /www/htdocs/w0124f50/blog.gianf.eu/wp-includes/plugin.php on line 571

Warning: Parameter 1 to wp_default_styles() expected to be a reference, value given in /www/htdocs/w0124f50/blog.gianf.eu/wp-includes/plugin.php on line 571

It’s been a while, now, since I started to use free software.
Now it’s time to give back. 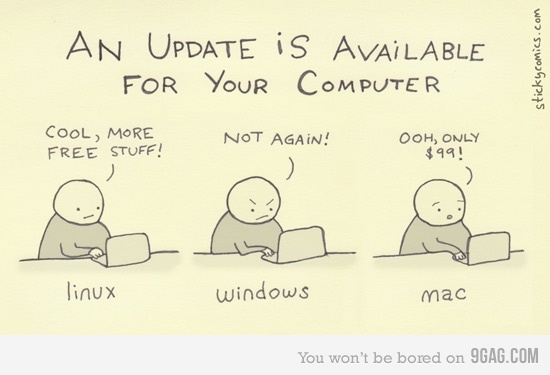 Speech given by Eben Moglen at the 2011 FOSDEM conference in Brussels on Feb 5, 2011

We are living in a world in which real-time information crucial to people in the street seeking to build their freedom depends on a commercial micro-blogging service in northern California . . .

We need to fix this.

We need to fix it quickly.

Excerpts of the speech

More than 2 years ago, I wrote about Rockbox: the open source firmware for mp3 players, written from scratch.

I wanted to try it out with my iPod Nano but before I did it, it stopped working (exactly like my older iPod shuffle, around 1 year after having purchased, they “gracefully” expired) so, for this and for other reasons: no more apple craps.
One Operating System after (of course GNU/Linux, what else?) I bought the Sansa Fuse player and I could not be any happier.
The other day I recalled about Rockbox and I wondered: “why not?” so I downloaded the installer and it worked like a charm!
Now I have a firmware with lots and lots of features and improvements over the old one, like: